The Fun Stuff: And Other Essays
James Wood 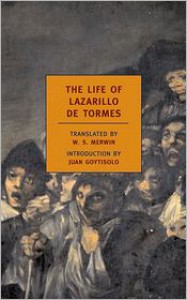 This one came recommended by Ol’ Soiled Slacks—a neighbor, of sorts, just a short drive from here, a pleasant afternoon’s…wait, no one voluntarily goes to Indiana, anywhere in Indiana. There are scads of Republicans there, fundamentalists aplenty, and a surprising number of nudist camps. The place is scary, and the contents of the water there is suspect at best. In any case.

So here I was, casually making my way through some pretty incredible Latin American authors, occasionally dipping into the waters of Spanish literature, meandering through Marías, applauding Alfau, laying in a variety of Vila-Matas. Doing my part. But, amazon started badgering me about this novel. OSS attested to its awesomeness. Even Harold Freakin’ Bloom included it in The Western Canon. The ever-conspiratorial Wikipedia implicated this one as foundational in the picaresque novel genre. Harmon & Holman’s A Handbook to Literature said: “It was not until the sixteenth century that this rogue literature [the picaresque novel] crystallized into a definite type. A novel called La Vida de Lazarillo de Tormes y de sus fortunas y adversidades, probably dating from 1554, was one of the most-read books of the century.” What? 1554? Who am I to argue with Bloom, Harmon & Holman, OSS, history? Okay, I bit. One used copy to go, please, and make it snappy!

Lazaro, the novel’s picaro, makes his way through childhood to adulthood serving one wretched master after another. He tells his story matter-of-factly, but with a sense of humor that neither detracts nor overwhelms. It’s The Painted Bird meets Will Rogers. What’s most remarkable about the novel is the contemporary feel given it, presumably, by W.S. Merwyn. Job well done. It reads like historical fiction rather than fiction with a history of almost 500 years. Given that, it’s down-right incredible. If Merwyn’s done a translation of Don Quixote, I want it and I want it NOW!

Four stars for the novel, a fifth for the translation. I’m not saying rush out and buy it. I will say, if you have a chance to get this one used, or from a library, especially in this translation, you could do much worse with your money and time.

Thanks for the recommendation to DK, OSS himself.